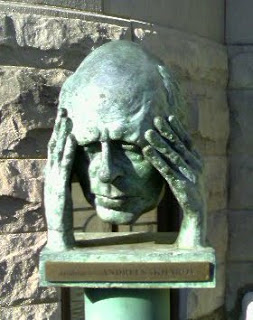 I've known people who have thrown themselves into a cause with such passion and effort that they quickly became known in the community, made a real difference in that community and accomplished magnificent things, but in my experience, these super-achievers suffer personally and many times professionally before eventually burning out completely.
While intense effort may be needed and useful in certain situations, it may be that a more sustainable approach is infinitely more effective in the long run. That's where the title of this post comes in, "Balance".
Balance is a simple concept but without an exact definition as the definition of balance as it pertains to the human condition is infinitely variable. Now, do I think that being in balance means that one can walk through their day in a euphoric manner accomplishing much and worrying about little? Exactly!
No kidding, that is balance. Anything short of that condition doesn't represent balance. Some of the most influential people I've ever met exude happiness so intensely that everyone in their proximity can feel it. Even when faced with magnificently complicated and difficult problems, these individuals can keep their sense of self, the demeanor that is inherently theirs while finding solutions hidden under the rocks of diversity.
We often work too many hours in a day not seeming to realize that with each hour we work we might just be less productive than the previous and so on until we get to that point of diminishing returns where we would be better off sleeping than working.
While I will champion the need to work massive hours to meet a deadline or complete a crucial project, habitual overwork is neither productive nor is it a desirable trait. The funny thing is, I was a hardcore subscriber to the old view of work harder and you will be rewarded in the long run until I heard a couple of interviews with Jason Fried of 37 Signals fame.
We in the Genre of, "I sit in front of a computer all day" have a disadvantage in that we actually can keep working for hours or even days on end. Unlike one who must actually move around and use muscles during their working hours, we commit few acts of physical activity in the pursuit of our goals. Our minds we enhance with caffeine and sugar to stay sharp long after we should have fallen over. The result is sometimes overwhelmingly good, sometimes not so much, but always less than it could have been.
If you're reading this, thanks. Now go take a walk :)
Posted by Ronnie Swafford at 11:33 AM No comments: